'A wiki devoted to Royal Pains that anyone can edit.

This wiki may contain spoilers related to Royal Pains.

Royal Pains is about a New York City doctor, Hank Lawson (Mark Feuerstein) who is fired after a hospital trustee dies under his supervision. He subsequently loses all possibility for another job in medicine when his original hospital reports his name to every single hospital in the country, and breaks up with his fiancée whom is fed up with him. He falls into depression and sits at his apartment eating junk food and watching soaps and movies in his underwear while workers hired by his ex-fiancée clean out his home of "their" possessions. Hank's brother, Evan R. Lawson, goes to his apartment and finds Hank's state has not changed. Evan decides to bring him to a weekend in the Hampton's to cheer his brother up. After faking himself as family to get into a party held by (Read more...) y

To write a new article, enter the title in the box below.

Not sure where to start? 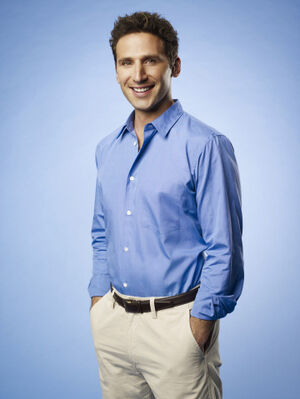 Hank is a handsome, smart, talented and innovative doctor in his mid-30s who thinks fast on his feet, solving even the most unexpected problems like a "Medical MacGyver."

Retrieved from "https://royalpains.fandom.com/wiki/Royal_Pains_Wiki?oldid=5829"
Community content is available under CC-BY-SA unless otherwise noted.